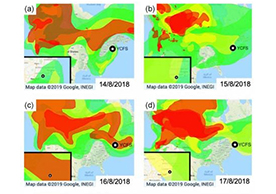 January 22, 2020
Original article: https://seas.yale.edu/news-events/news/air-pollution-new-york-area-linked-fires-hundreds-miles-away
A new study shows that air pollutants from the smoke of fires from as far as Canada and the southeastern U.S. traveled hundreds of miles and several days to reach Connecticut and New York City, where it caused significant increases in pollution concentrations. 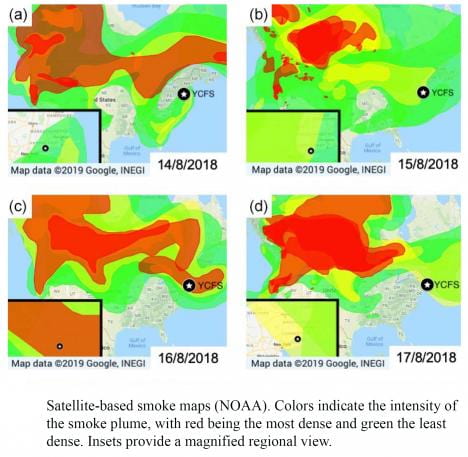 For the study, published Jan. 21 in Atmospheric Chemistry and Physics, researchers in the lab of Drew Gentner, associate professor of chemical & environmental engineering, monitored the air quality at the Yale Coastal Field Station in Guilford, CT and four other sites in the New York metropolitan area. In August of 2018, they observed two spikes in the presence of air pollutants – both coinciding with New York-area air quality advisories for ozone. The pollutants were the kind found in the smoke of wildfires and controlled agricultural burning. Using three types of evidence – data from the observation sites, smoke maps from satellite imagery, and backtracking 3-D models of air parcels (both the maps and models were produced by the National Oceanic and Atmospheric Administration) – the researchers traced the pollutants’ origin in the first event to fires on the western coast of Canada, and in the second event to the southeastern U.S.
Biomass burning, which occurs on a large scale during wildfires and some controlled burns, is a major source of air pollutants that impact air quality, human health, and climate. These events release numerous gases into the atmosphere and produce particulate matter (PM), including black carbon (BC) and other primary organic aerosols (POA) with a diameter of less than 2.5 micrometers. Known as PM2.5, it has been shown to have particularly serious health effects when inhaled.
While more reactive components are often chemically-transformed closer to their place of origin, PM2.5 tends to last longer. In the case of this study, that allowed much of it to travel from the fires to the monitoring sites – a period ranging from a few days to about a week.
“Given the sensitivity of people to the health effects emerging from exposure to PM2.5, this is certainly something that needs to be considered as policy-makers put together long-term air quality management plans,” Gentner said.
The impacts of wildfire smoke will likely become increasingly important in the coming years. 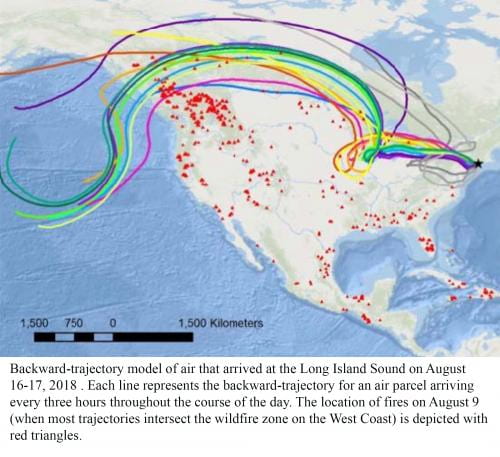 “When people are making predictions about climate change, they’re predicting increases in wildfires, so this sort of pollution is likely going to become more common,” said lead author Haley Rogers ‘19, who was an undergraduate student when the study was conducted. “So when people are planning for air pollution and health impacts, you can’t just address local sources.”
Although the levels of the PM2.5 decreased over time and distance, co-author Jenna Ditto, a graduate student in Gentner’s lab, noted that awareness of its presence in the atmosphere is critical to public health.
“Studies indicate that there are no safe levels of PM2.5, so typically, any level of it is worth taking a look at,” she said.